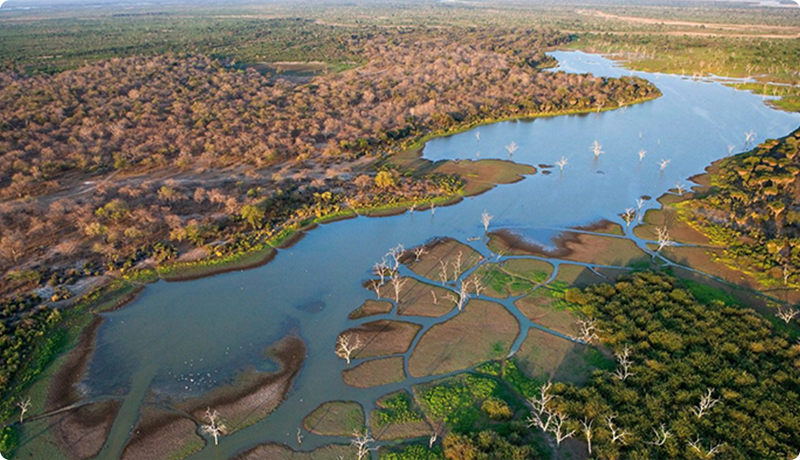 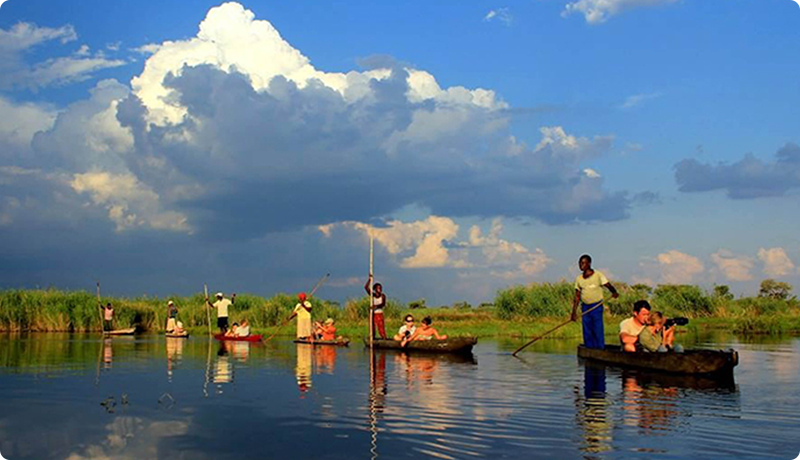 Botswana’s Okavango Delta is a remarkable river where, every year, hordes of tourists congregate to fulfill their largest African adventure fantasies in one of Africa’s greatest concentration of wildlife. Here, you will witness an interesting blend of swamp land, a rich wildlife, palm groves, water lilies and reed beds come together to create a wet and wild real life theatre of nature based for tourism at its best.

In a typical delta, a river gets divided into multiple branches and flows to inland areas before the water continues to the sea. In some cases, however, the water can never reach the ocean because the land area into which it flows is apparently a desert. Okavango Delta in Botswana makes a fine example of that.

This delta starts its way in the mountains of Angola which flows deep into the northern territory of Botswana. Going miles after miles of continuous progression, northern Botswana brings out the challenge with its papyrus swamp and palm groves, rendering the stream separated to multiple sections. Huge volume of water, despite flowing in different paths, is trying to reach home in Indian Ocean but unfortunately met by the dry Kalahari sands. But before the water evaporates its way back to the nature, it brings life to northern Botswana; it creates the biggest oasis in Africa called the Okavango Delta. It is a wetland that covers almost 6,000 square miles of area of Kalahari Desert in northern Botswana.

Okavango Delta is comprised of seasonally flooded plains and grassy wetlands. While the water that exists in the land comes from a neighboring country, the wetland system is as pristine as it can be; it is intact, undisturbed by any interferences from the outside. One of the most interesting facts is that flood only comes during the dry season, and this brings us to another surprise: all native animals and plants in the delta have adapted to this anomaly, allowing them to thrive even when their annual seasonal changes are not exactly the same with nearly all ecosystems in the planet. Their biological and hydrological processes have been in good harmony with such distinguishable treatment from the nature. Seasonal flooding occurs from March and is at its peak in July. Because the timeframe coincides with dry season in the rest of Botswana, great migrations from dry hinterland are expected.

All areas within the rather unclear borders of Okavango Delta are protected lands. In fact, about 40% of the delta is protected by Moremi Game Reserve. The remaining 60% is comprised of 18 Wildlife Management Areas and a Controlled Hunting Areas managed by private or community trust organizations.

A small number of indigenous people have inhabited the area for centuries. Many different groups exist and all of them are basically hunters-gatherers. It is their cultural identity to hunt animals and take resources from the nature; the good thing is that all their activities have showed no negative impact of any kind to the balance of the ecosystem. For some reasons, the area attracts the interests of other new settlements but most are located on the outside boundaries of the delta.

There isn’t much in the Okavango that will leave you unimpressed. In fact, the only hard time you will have is trying to fit in all the activities that are available.

Some of the world’s most threatened large mammal species live in Okavango Delta for examples rhinoceros, black rhinoceros, white rhinoceros, lion, cheetah, and African wild dog. Between the main area of the delta and the surrounding arid regions, there have been seasonal dynamic shifts of the animals. During wet season, large mammals move away from the delta and graze the green environment; as season goes on and starts to dry, they move back to the center of the area to get enough supply of food and water. Okavango Delta is home to (approximately) 530 species of birds, 160 species of mammals, 155 species of reptiles, 35 species of amphibians, and 1500 species of plants.

With more than 500 species of birds, Okavango Delta is also an ideal destination for bird-watchers. Among the most popular species include Pel’s fishing owl; it is a rare species most commonly found in mangosteen trees and waterside groves. Some large mammals have been recently introduced to the delta such as lions, elephants, leopards, rhinos, and buffalos. Red lechwe are found in the delta as well.

Although Moremi Game Reserve is the most accessible area of Okavango Delta, it does not mean that other places lack the scenic view of wildlife. The sub-divisions also offer unspoiled natural adventures along with lodges and camps (some of them are luxurious, too).

Here are some things to keep in mind before embarking on your adventure:

When you should visit Okavango Delta

It may seem counterintuitive, but the best time to visit the Okavango Delta is during the flooding season in the winter in the months of July and August. However, unlike the epic rainfall that is depicted in a Hollywood blockbuster, the floods in the Delta are essential in keeping the local wildlife safe and replenishing the lagoons. It also makes it possible for you to navigate the Delta via mokoro, the traditional canoe of the Delta (see below).

The delta is pretty much the center of Botswana safari industry. It is a green oasis in an otherwise dry environment, and certainly a place you do not want to miss while you are in Africa. It is a fantasy land for anyone who has even a remote appreciation for nature. You will be mesmerized by the abundance of wildlife it has to offer and leave only loving Africa more than you ever did. Take the time now to book your ticket and have the African adventure you have always wanted.