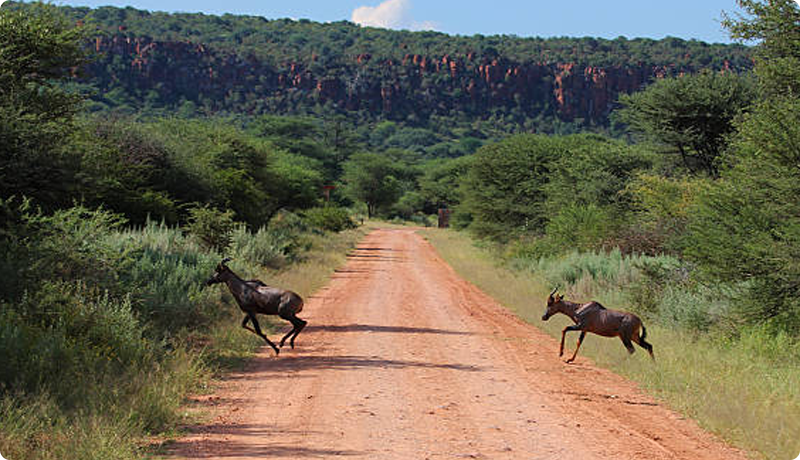 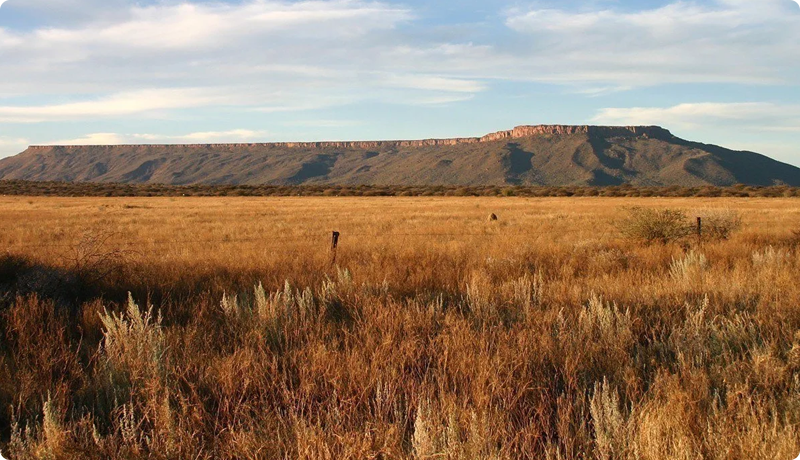 The striking sight of Waterberg Plateau's brick red sandstone crowned with lush vegetation is like a jewel in the crown of Namibia. This unique place is a table mountain that drips water at its feet, and a game reserve at the top of the mountain.

This unique habitat has supported a wide and diverse range of flora and fauna for thousands of years. With a height of 200 meters, this remarkable feature has provided nature with the perfect wildlife sanctuary.

The Waterberg Plateau park is situated on a 41 000 hectares of surrounding land that was declared a Nature Reserve in 1972. This great table mountain enables some of Namibia's endangered wildlife to be roaming around the park.

The prominent mountain that rises from the plateau, gives the national park and the plateau its distinctive name, the Waterberg. An Afrikaans name that means "Water Mountain".

There are currently 25 species of mammal including; Giraffe, Impala, Warthog, Sable, Antelope, Blue wildebeest as well as black and white Rhinos.

You may be lucky to see the leopard stalking stealthily along the cliffs, or on the plateau.

This is also a birdwatchers paradise, where 230 indigenous species have been recorded, including Bradfield's hornbill, Rüppell's parrot, Hartlaub's francolin and the Black eagle.

There is an interesting history associated with this region. The Battle of the Waterberg in 1904 took place in the foothills of the Waterberg Plateau where the Herero people heroically faced defeat against the German troops. Many of the Herero people escaped across the Omaheke Desert where many died through lack of food and water, and a few managed to make it into Botswana.

About 1000 men managed to cross the Kalahari into British Bechuanaland (now Botswana) where they were granted asylum. Today the site of the battle is within the Park, and there is also a grave yard for the Germans.

How do you get the Waterberg Plateau Park

You can get to the park by conventional roads from Otjiwarongo, which is the nearest city about 68 km (42 miles) to the west of the park. Otjiwarongo is 240km (150 miles) from Windhoek.

What can you see and do

Here are three activities that will allow you to get an insight into the life and culture of the Waterberg Plateau:

The Waterberg Plateau Park offers a unique experience of beauty, tranquility and wilderness. You can use it as a stop-over for two nights as part of a more comprehensive itinerary, and explore this unique African wilderness with its incomparable flora and fauna. Either way, you will feel that you did not stay long enough. A wonderful destination for meetings and conferences for those that prefer a beautiful natural setting.