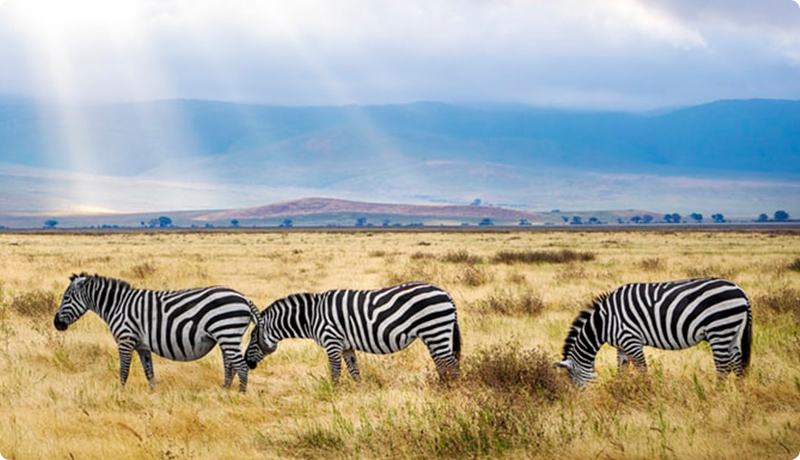 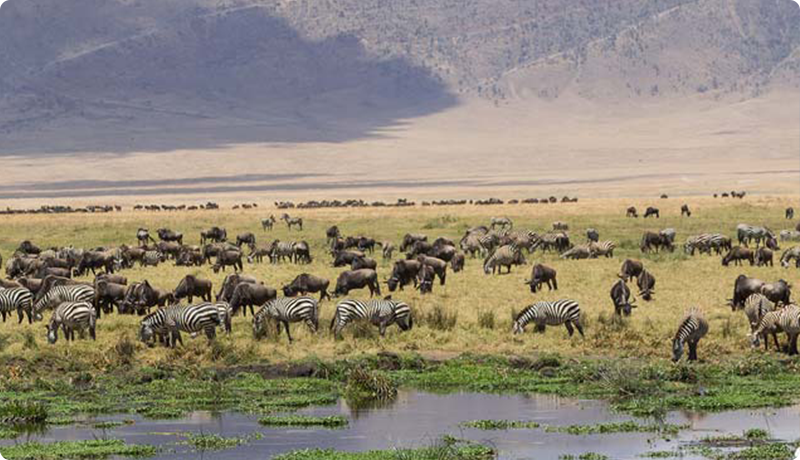 Comprised of forests, savanna, and highland plains, the Ngorongoro Conservation Area covers a nearly 3,200 square miles area in Tanzania. It is a protected area governed by the Tanzania national Parks Authority and one of UNESCO World Heritage Sites. One of the main attractions for the conservation area is the Ngorongoro Crater; it is the world’s largest intact, inactive, and un-flooded volcanic caldera. This crater formed approximately three million years ago after large volcano exploded and collapsed.

Ngorongoro crater is about 12 miles across and 2,000 feet deep. Crater floor is about 100 square miles. Unlike smaller craters on top of dormant volcanoes, which also often are tourism destinations, Ngorongoro Crater is home to tens of thousands of animals and people as well. It is a natural wonder worth visiting and protecting at the same time.

Established in 1959 as multi-use land, the area is home to Maasai semi-nomadic pastoralists who coexist with huge number of wildlife. The conservation area plays major factor in maintaining the wildlife biodiversity. Some of the globally threatened species live here, and it is also part of the route used by animals in The Great Migration, including but not limited to Zebras, Wildebeest, and Gazelles. Ngorongoro Conservation Area is an important archeological site too; studies have found sequence of evidences linked to human evolution and environmental dynamics for examples the footprints of early hominids.

This is a UNESCO World Heritage Site, and therefore there are strict limitations to human access and intervention. Developments of properties in the area (or surrounding areas) must comply with the governing body too. There are still developments in some areas, but the main concern is to preserve the quality of tourism experience. It means the natural and cultural attributes of the area must remain unchanged. Any development that potentially brings negative effects on those attributes is not permitted.

Ngorongoro Conservation Area is open to public; if you plan to visit the place, please do not expect the kind of conventional pleasure travel where you have easy access to modern technologies and the privilege to enjoy typical accommodation such as hotel or transportation.

There are more than 25,000 large animals live in Ngorongoro Crater. Most of them are ungulates including:


African Cheetahs, and East African Wild Dogs are also present, although rarely seen. During wet season, 20% (or more) of wildebeest and 50% of zebra leave the area, while buffalos and elands reach their higher numbers in the crater during the rains. In the journey of their Great Migration, it is not uncommon to see flocks of animals consisting of about 1.7 million Wildebeest, 470,000 Gazelles, and 260,000 Zebras. Lions and Cheetahs live mainly on the west part of the area. Ngorongoro Conservation Area has recorded more than 500 species of birds such as white pelican, ostrich, and flamingo.

In the flora department, Ngorongoro Crater is home to rain-watered vegetations, lush plants, and desert plants. Highland forest and uncultivated lowland vegetations exist here as well, along with arid and semi-arid plants. Short grass is abundant. In many other craters, you’ll be just pleased to stand on the edge and see everything from above. In Ngorongoro Crater, the real treat only happens when you come down and enjoy those who live on the surface. A combination of undisturbed environment and high density of wildlife may make you feel overwhelmed yet reluctant to go home. Many places claim to be natural wonders (and they are probably right), but none comes close to the extent of wonder that Ngorongoro Crater is.

The conservation area has another place to flood your sense with enthrallments: the Olduvai Gorge. It is a 30 miles long dusty ravine often referred to as the cradle of humankind. It is an indispensable paleontological and biological anthropology site to help us understand the development and social complexities of early humans. Its geological attributes are well-presented by layers after layers of volcanic deposits dating back 15,000 years ago. Olduvai Gorge is like a documentation of ancient life.

What makes Ngorongoro Conservational Area unique is that it protects the undisturbed nature of ecosystem not only for plants and wildlife, but also the Maasai people. Approximately 200 years ago, Maasai people arrived in the area and colonized a substantial portion of it. Due their natural way of life, Maasai delivers fine example of how human and wildlife can coexist in the same ecosystem without interfering with each other. Ngorongoro Conservation Area is home to about 42,000 Maasai people, and they are allowed to roam freely. They have the permission to take their animals into the crater for grazing but not to cultivate and live there; this is how strict the regulations are. Even those who live by ancient lifestyle and have proven that they can be in perfect harmony with animals are still not allowed to disturb the ecosystem in the crater.

Visitors are allowed to visit Maasai Cultural bomas and learn everything about their cultures, purchase mementos, or take photographs. Please be aware of the fact that taking photographs of people along the roadside without consent is considered inappropriate. Within the conservation area, there are some campsites, but only for exclusive use and they have no modern facilities (or facilities at all). Camping is not allowed, unless you have the permission to do that. This is the place when you demand a back-to-nature adventure, not luxuries-filled experiences.