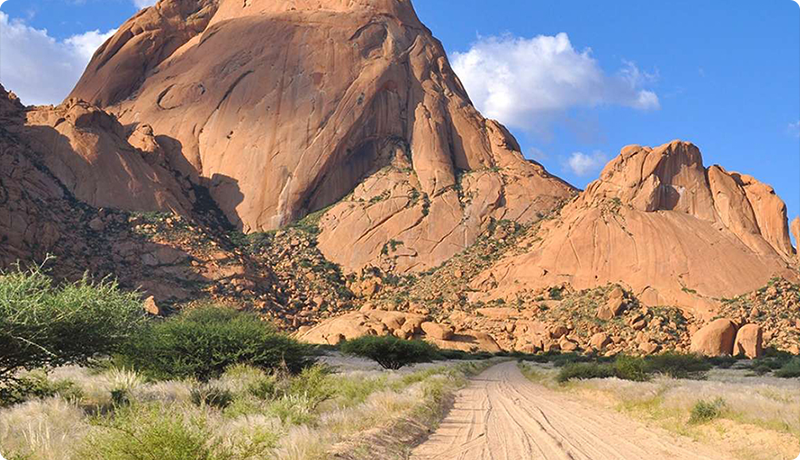 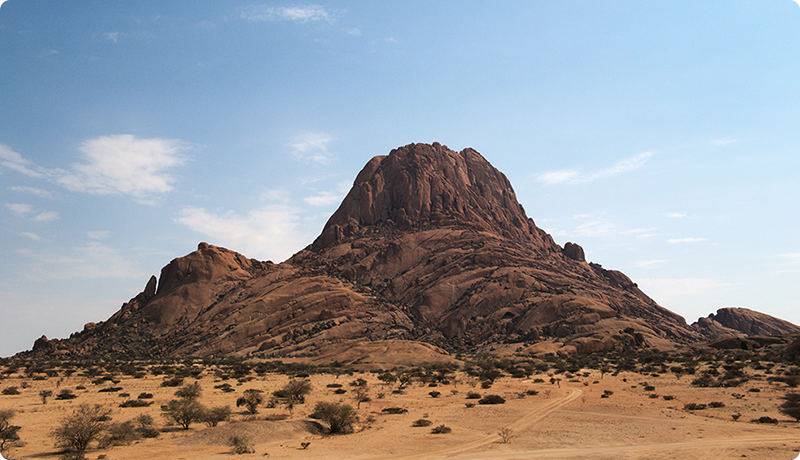 The Spitzkoppe is one of the highlights of visiting Namibia. A cluster of granite mountains on the north western directions of Usakos, enroute Swakopmund. A favourite destination for campers, climbers, and photographers, and considered as Namibia's most recognizable landmarks.

The Spitzkoppe is also described as the "Matterhorn of Namibia", and rises to an altitude of 1728 metres, Although it is not Namibia's highest mountain, due to its striking outlines, it happens to be the popular mountain in the country.

Situated in an endless, dry plain, the island of mountains can be seen from afar. The difference in altitude between the mountain peak and the surrounding plains measures 700 Metres. Next to the Spitzkoppe is the "Small Spitzkoppe" with a height of 1584 metres above sea level and next to it the Pontok Mountains.

This isolated mountain, which rises suddenly from the surrounding desert, is known as an inselberg (island mountain), and shares this distinction with the Uluru in Australia and the Sugar Loaf Mountain in Brazil among others.

All around the Spitzkoppe and the Pontok Mountains you will find hundreds of rock paintings. The Spitzkoppe is known to contain almost 40 rock art sites and test excavations reveal well preserved work dating back 4 000 years. Some of the art seems to portray rain making rituals.

The findings of a wide range of objects used for hunting, the preparation of animal hides, and the remains of animal and plant food, suggests that this area was a dry season base with reliable resources to sustain life.

Climbing this mountain a century ago presented formidable challenges due to its isolation, the heat and total lack of water. It is however not as difficult for today’s climbers with modern technical equipment.

The Spitzkoppe is ideal for hikers and climbers of all levels. There are slopes simple enough for beginners, and rock faces that are challenging for professionals.

Other activities in the area include bouldering and rustic cave camping as well as multi-day safaris. This area is not for those who want lush forests. But if you are a camper, climber, a geologist, a hiker, a bird spotter or a stargazer, Spitzkoppe is like heaven on earth. The sheer diversity of these landscapes are breath-taking and the history of the place and the night sky will stretch your mind.